Quick: what has an enormous red body, ivory tusks, and a whiskered face? It’s the intriguing walrus, the 3,000-pound “elephant” of the Far North.

Pacific walrus can be difficult or expensive to see in the wild, with only a few key locations in Alaska where viewing is realistic or practical.

Scientists estimate 200,000 of these giant pinnipeds (the seal family) live in the Chukchi and Bering seas between Alaska and Russia. For most of the year, they rely on pack ice as a floating platform for foraging and raising pups. But during summer and fall, when sea ice extent shrinks, males tend to “haul out” on one of 150 remote, rugged beaches along Alaska’s western coasts.

Thousands of male walruses converge every summer on seven small, craggy islands about on Bristol Bay. Dominant among them is Round Island, where as many as 14,000 ivory-equipped bulls have been counted wallowing and bellowing on rocky beaches in a single day. The refuge, created more than a half century ago, was intended to protect this extraordinary congregation, often the largest in North America. Prime time begins after sea ice has melted back in late May and lasts until mid-July. Visiting these haul-outs in remote coastal Alaska really requires expert guiding, and we recommend that you book your trip through a full-service tour. Contact the Walrus Islands State Game Sanctuary for more details. Or book a tour with Trygg Air, local specialists in walrus-viewing adventures!

Other noted spots in the sanctuary:

This rugged, rocky headland regularly attracts thousands of male Pacific walruses and has been Alaska’s second largest haul-out (after Round Island) in recent decades. Since the 1980s, up to 12,500 males have been counted at one time, with peak numbers appearing between June and October.

Other Well-Known Haulouts in Remote Alaska

Very difficult or impossible to visit

In recent years, tens of thousands of male walruses have begun coming ashore along the Chukchi Sea in late summer, with an especially dramatic congregation often forming near the village of Point Lay. Scientists speculate the growing phenomenon—where up to 40,000 animals have been counted in one day—is in direct response to the reduction and late freeze-up of sea ice offshore. While of great interest to scientists and Native residents, the Point Lay haul-out is off-limits to visitors and aircraft. For more information, contact the marine mammals office of the U.S. Fish and Wildlife Service.

Beaches on this headland dividing Bristol and Kuskokwim bays are among Alaska’s largest haul-out sites, with more than 5,000 bulls counted in some years. Visiting the locale—130 miles southwest of Dillingham—will be expensive but not impossible. Contact the Togiak NWR for details. 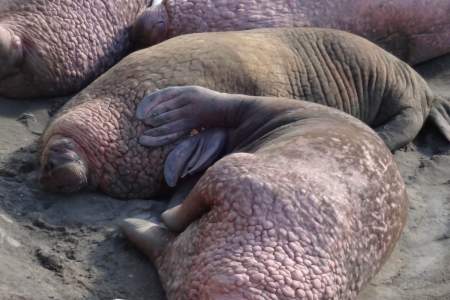 Trygg Air offers day trips for wal­rus view­ing from Anchor­age as well as King Salmon, in South­west Alas­ka. Fly to King Salmon com­mer­cial­ly from Anchor­age, and then meet Trygg Air for a 90-minute scenic jour­ney along the west side of the Alas­ka Penin­su­la to Cape Seni­avin to view these 4,000 pound ani­mals that haul out on the beach. Trygg can also fly you out to two oth­er icon­ic places: Brooks Falls, to see griz­zly bears swat­ting at salmon; and the  ...more

This is where the wal­rus head from August through Novem­ber, as they move north in prepa­ra­tion for the win­ter pack ice. Vis­it only if the wal­rus­es have already left Round Island.

This rocky, moun­tain­ous and remote island is Alaska’s best place for observ­ing and pho­tograph­ing Pacif­ic wal­rus­es as they rest on the rocky shore­lines in the hun­dreds or even thou­sands dur­ing sum­mer. Vis­it­ing is only for the adven­ture­some as it involves trav­el in small planes and boats, and overnight stays on the island involve camp­ing in a remote set­ting; but for those will­ing, it is an unpar­al­leled wildlife and wilder­ness experience.

This spot sees a good num­ber of wal­rus­es in the sum­mer­time, with more vis­it­ing in recent years. While Round…

This spot sees a good num­ber of wal­rus­es in the sum­mer­time, with more vis­it­ing in recent years. While Round Island has con­sis­tent­ly more wal­rus­es, Cape Seniavin’s access is easier

Noted haulout, but off-limits to visitors

In recent years, tens of thou­sands of male wal­rus­es have begun com­ing ashore along the Chukchi Sea in late sum­mer. While of great inter­est to sci­en­tists and Native res­i­dents, the Point Lay haul-out is off-lim­its to vis­i­tors and aircraft.