Now there are two forms of Bison in North America that were both derived from the great North American Bison. The Wood Bison have their habitat in the northern half of North America, residing between Alaska and Canada. The plains Bison have historically lived in the lower 48 states.

Now the Wood Bison have made physical adaptations that will better prepare them for the winter season as well as the extreme climate that we have the in the northern portion of North America.

Wood Bison will be slightly larger than their counterparts in the south, making them truly the largest land animal in the western hemisphere.

Females will generally settle in just under 2,000 pounds and a typical male can weigh between 2,000 and 2,200 pounds. However a dominant bull can weigh in at 2,600 to 2,800 pounds, again truly making them the largest land animal in the western hemisphere.

Another reason the Wood Bison are so unbelievably special to the Alaska Wildlife Conservation Center, and to conservationists all around the world, is because they are the only animal around the world to come off of the extinction list.

Wood Bison were actually on the extinction list for 17 years, prior to a pure bred herd being found in the northern regions of Canada in the early 1950’s. It’s from this herd of 23 that we have the entire population of Wood Bison in the world today.

The Wood Bison at the Wildlife Conservation Center are currently the only herd in the United States.

We’ve been growing our herd from the original 13 we received in 2003, which increased the herd size to 135. We received an additional supplement of Wood Bison in 2008 and have since had successful birthing seasons of our own herd mates.

We had the first Wood Bison born in Alaska in 2005 and it was the first time in well over 100 years that we’ve had a birthing of Wood Bison in the state of Alaska.

The Wood Bison currently receive the majority of our land as well as our efforts at the Alaska Wildlife Conservation Center as we aim to reintroduce a once historic breed back into the wilds of Alaska.

The Wood Bison were re-introduced in 2015 in the lower portions of the great Innoko River Area. The herd has had successful calving seasons in 2016 and 2017 in the wild.

Today there are roughly 20 Wood Bison at the Alaska Wildlife Conservation Center. 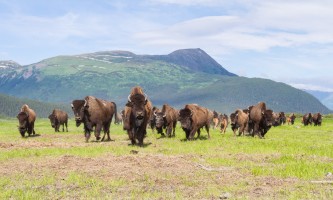 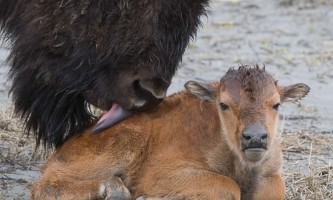 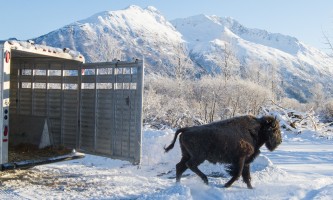 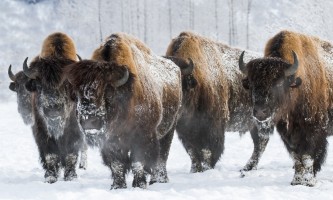