Ride the rails on a real gold-rush era, narrow-gauge railroad from Skagway into the heart of the Yukon. On the White Pass & Yukon Route Railroad, you’ll have several trip options, taking you past glacial rivers, waterfalls, and gorges for a real taste of wild Alaska. You’ll feel like you’ve gone back in time on this authentic train, as you climb 3,000 feet to scenic vistas and past aptly-named spots named Inspiration Point and Dead Horse Gulch on your way to get a look at the headwaters of the famous Yukon River.

Go for the Summit

The 2.5 hour excursion to White Pass Summit pulls out of the station at Skagway, passes by the grave of the city’s most notorious shyster, Soapy Smith, then begins to climb nearly 3,000 feet in 20 miles up steep grades and around tight, cliff-hanger curves.

You’ll pass Inspiration Point, looking down on the Skagway Harbor and out at the Sawtooth Range, and know how this spot got its name. Same for Dead Horse Gulch, with the bleached bones of perished gold-rush pack animals scattered below. Before looping at the White Pass Summit, you’ll get a look at the headwaters of the Yukon River.

You’ll find tremendous photo opportunities all along the route. For the best conditions, book passage in the book in the morning, available daily, for the soft morning light, or an evening train, which runs Tuesdays and Wednesdays and Thursdays, for the glow of the evening light. There are also fewer passengers on these trains.

You’ve gone this far, keep going with the Bennett Scenic Journey, a 67.5-mile ride through history to Carcross. You’ll be served a box lunch along the way to the turn-of-the-century Bennett Station House, reachable only by train or by making it over the Chilkoot Trail. From Carcross you can take a motorcoach to Whitehorse or return to Skagway the same day. Or, you can spend one or more nights, and return to Skagway by train.

The Fraser Meadows Steam Excursion adds the authentic image, power and sounds of the gold-rush era as a steam locomotive chugs its way up the pass and six miles beyond the White Pass Summit before turning around.

Travel Back in Time

Gently swaying back and forth along the tracks, you’ll travel back in time aboard parlor cars, some vintage, some replicas, with enormous windows and viewing decks fore and aft of each car. Glancing down at the 10-foot-wide railroad bed carved into solid-rock mountainsides, then up at the panoramic views, you’ll be as floored by the scenery as you are by the marvel of engineering it took to carve this route through country formidable even for goats.

Between May 1898 and July 1900, some 35,000 workers had a hand, big and small, in connecting Skagway and Whitehorse by rail, and 35 died in the process. (The useable tracks now end at Carcross.) Imagine workers hanging from rock faces by ropes, and the 450 tons of explosives it took to blast the line, a good half of it just to get past Rocky Point at Milepost 6.9.

“Give me enough dynamite and snoose and I’ll build you a railroad to hell,” contractor Michael J. Heney is said to have boasted.

Twelve miles out of Skagway, the train begins a huge horseshoe curve. You’ll see Slippery Rock, a wooden trestle, a tunnel and the best perspective on the engineering wonder and grit it took to build this section of rail in the dead of the 1898–1899 winter.

The White Pass & Yukon Route has been designated an International Historic Civil Engineering Landmark, putting it in the good company of such landmarks as the Eiffel Tower, the Statue of Liberty, and the Panama Canal.

Passports are required on all but the White Pass Summit Excursion. Reservations are highly recommended. Cruise ship passengers can board dockside, if they purchase tickets through the cruise line. The White Pass Summit train is equipped with a wheelchair lift, but be aware that others may not be. Space is limited in cars equipped with a lift, so please advise when booking if your party will need extra assistance when boarding. 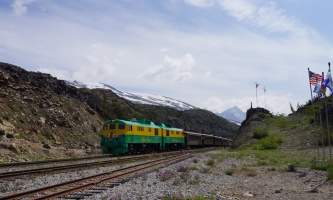 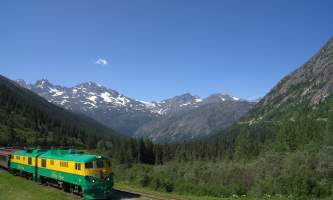 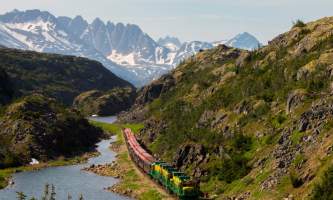 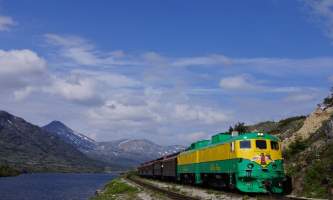 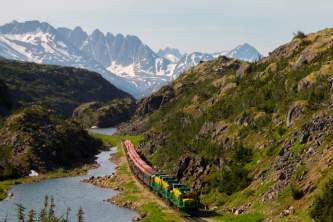