The Talachulitna or "Tal" as it is commonly referred to, is located totally within state patented lands. When people talk of floating the Tal it is usually a 5 to 7 day trip, down Talachulitna Creek and then down the Talachulitna River to the Skwentna River. From the start at a headwater lake there are 16 miles of shallow Class I creek and then 32 miles on the Tal with Class I to IV rapids, depending on water levels, and an additional 13 miles on the Skwentna that you could easily float. Small rafts and inflatable kayaks are best for this small river with lots of boat dragging in the beginning for a couple of miles. There are several places to end a trip, with 50 miles to Skwentna the longest you might consider doing. It is a popular fishing destination and there are lodges, cabins and floatplanes all along the way. While on Talachulitna Creek you will see no motorboats as it is designated non-motorized for most of the summer. It was the first river in Alaska to be designated catch and release only for Rainbow Trout and was, traditionally used by Athabascan hunters to return from their trips to the interior with their game, making moose skin covered boats after their successful hunts and floating back to permanent villages. All along the way the scenery is beautiful with the Tordrillo Mountains to the west. Along the Tal the gorges are very narrow, with 100-150 feet high bluffs on either side of the river. There is much rock exposure through here.

To get to the put in you will need to charter a floatplane from either Anchorage, Willow or Skwentna to fly you to Judd Lake at 61 degrees and 33.8 minutes by W 151 degrees 33.5 minutes at the head of Talachulitna Creek. There are lodges and a half dozen cabins here with motor boats on the lake. A good camp area is on the north side of the lake.

The take out can be several options. There is a gravel strip just 1 mile below where the Tal joins the Skwentna at a beach on the left, just before a gorge and is fifty miles from Judd Lake. If you float the 13 miles to the town of Skwentna you can arrange to be picked up there, or you could try to catch the regular mail plane to Anchorage.

Judd Lake is a scenic and clear lake but popular enough to have year round residents and a couple of lodges and a half dozen private cabins. The north end of the lake is best for camping. The inlet is the western end and the outflow is at the southeast end of the lake. The first two miles below the lake are very shallow and you will have to walk and drag your boats a lot as you move downstream. The creek flows to the east with a slow current with beaver lodges and waterfowl seen a lot. There are Red and King Salmon through here. In late August is when the creek is at its lowest. It is a Class I section of river at most water levels with some Class II at high levels. The confluence with the Talachulitna River is known as The Forks and here the river current practically disappears. The Forks is where Bear Creek, Talachulitna Creek and the Tal join. If you camp just upstream of the Tal you shouldn't have motorboats going by. It is heavily fished down to Hell's Gate where restrictions on powerboats apply.

Here at The Forks there is little or no current with the Tal turning to start a northerly course. For 10 miles the river swings back and forth along oxbow features with the best views of the Tordrillos to the west and Beluga Mountain to the east from here. After many long winding river bends in the open valley the river suddenly runs straight for a mile in a northwest direction and you can see the constriction of Hell's Gate ahead. It is a slow, 14 miles of gentle Class I all the way to the beginning of the steep Talachulitna Canyon, with Hell's Gate the first set of rapids. GPS N61.71 degrees by W 151.44 degrees

Hell's Gate is a 100-yard section containing numerous large boulders to move around or crash into if it is low water. It is a good idea to pull over and scout this section to determine if you will line your kayaks along the shore. Rafts can float through the bumpy run easy enough. Below Hell's Gate is a two mile section of rocky rapids that comes quickly. Below this section, and over a course of 15 miles, the river runs through a series of gorges. After five miles there is one with Class II and III rapids where the river bends 90 degrees to the right at N 61.76 degrees by W 151.45 degrees and runs a short distance to where the river opens a bit for a northward section of a mile to where the next gorge is found at N 61.77 degrees by W 151.41 degrees. Several of the rapids can be classified as Class III+ or even Class IV and all are connected by swift Class II water. Continuing on, there are two more distinct canyons with numerous rocky Class II and III rapids to negotiate. Some of the runs are through narrow slots while others are over big boulders with one screaming left hand turn along a rock wall. The rapids end a couple of miles past Thursday Creek, which enters from river left amid a spruce forest, and 3 miles from the Skwentna confluence.

There is an interesting feature along here. Just after the last rapid the canyon walls pull back and the river has numerous sloughs and oxbow features again until it piles into the right side wall of an escarpment above which is Top Lake. The river begins to turn left, due north along here and soon swings to the west away from this escarpment that separates the Tal from the 7-mile and 8-mile creek drainages. There is a hidden canyon to the east where the river starts to turn northwest towards the Skwentna. There might be a cool hike in the N 61.81 degrees by W 151.34 degrees area. Just above the confluence with the Skwentna is the Talachulitna Lodge where there is a small airstrip if you had an emergency. There are several cabins in the area. After the last of the cabins there is an area of campsites within sight of the Skwentna that could be your last night on the clear Talachulitna. Below this is the Skwentna River.

Once you join the Skwentna you leave behind the clear waters and flow due north joining the much bigger silty waters of a glacial river. Two miles below on river left, and opposite some USGS water-monitoring sites with a cable crossing is the place where a plane on wheels can land for you. The USGS site is at N 61.8 degrees by W 151. 4 degrees. Along this point you enter the Skwentna Gorge where some big waves can be found. Below this is 8 miles of giant braided river with some alternate channels other than the main channel to be sure not to take. Stay with the main flow for the quickest run to Skwentna, which lies on river left. There will be boats tied up at the landing. The airstrip is at N 61.96 degrees by W 151.18 and is a third of a mile from the river. There are regular scheduled mail planes that you may be able to get a seat on but with a lot of gear it is more of a hassle than a chartered flight in a 206 or Beaver. Plus the mail plane only goes to Anchorage and not to Willow.

For the most up to date fishing regulations please visit the Alaska Dept. of Fish & Game. 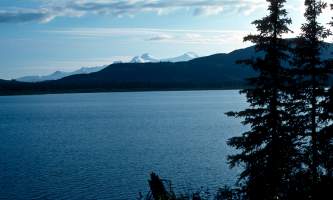 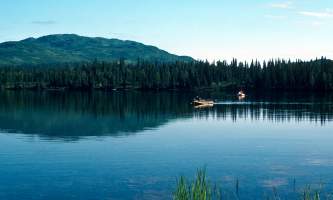 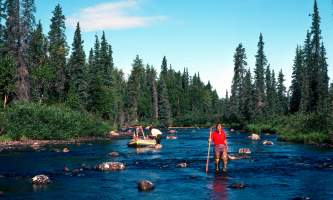 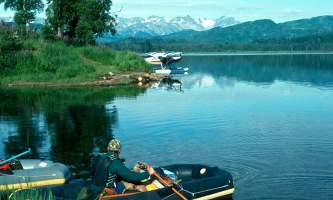 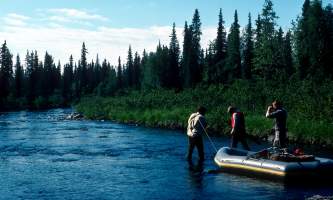 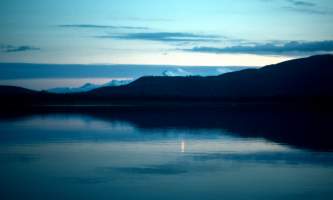 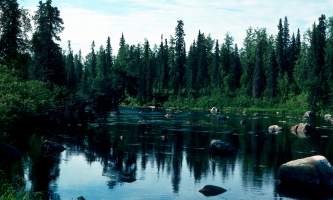 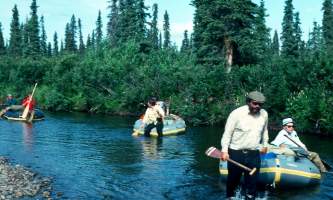 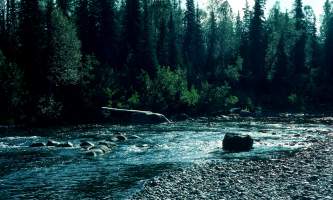 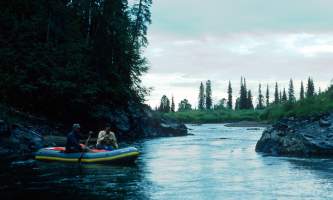 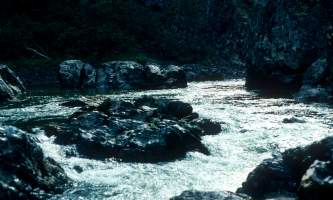 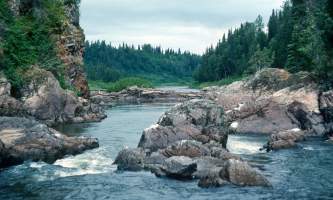 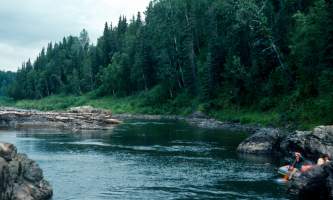 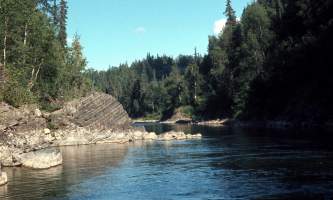 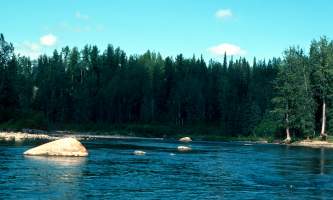 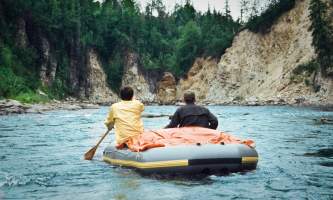 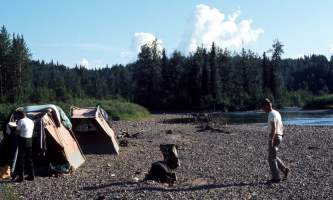 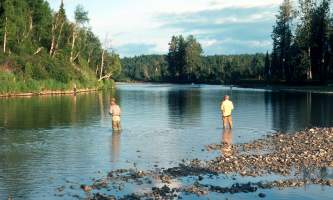 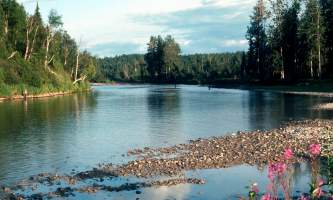 Put In Option for Talachulit­na River

To get to the put in you will need to char­ter a float­plane from either Anchor­age, Wil­low or Skwent­na to fly you to Judd Lake at the head of Talachulit­na Creek. There are lodges and a half dozen cab­ins here with motor boats on the lake. A good camp area is on the north side of the lake.

Take Out Option for Talachulit­na River

If you float the extra 13 miles to the town of Skwent­na you can arrange to be picked up there, or you could try to catch the reg­u­lar mail plane to Anchorage.

Take Out Option for Talachulit­na River

There is a grav­el strip just 1 mile below where the Tal joins the Skwent­na at a beach on the left, just before a gorge and is fifty miles from Judd Lake.