Here we are at the Sitka Blacktail Deer habitat at the Alaska Wildlife Conservation Center.

There are an estimated 200,000 Sitka black-tailed deer in Alaska. The native range of black-tailed deer in Alaska is the temperate rainforest of the southeast Panhandle, where deer depend greatly upon old growth forests. Such forests provide an ideal mix between cover from deep snows and adequate light to allow a rich understory of plants crucial to deer survival in winter. Due to their specific habitat requirements, Sitka black tailed deer are susceptible to effects of habitat degradation and human impacts. In addition to their native range, Sitka black-tailed deer have been introduced to Kodiak and surrounding islands as well as Prince William Sound, and the Yakutat area.

Sitka black-tailed deer are a diminutive coastal subspecies of the mule deer that is common throughout western North America. Rocky Mountain mule deer currently range as far north as the Yukon Territory of Canada, though there are occasional reports of mule deer in eastern interior Alaska.

Black-tailed deer are generalist herbivores, feeding on a variety of plants throughout the year. Summer diets consist of new growth of shrubs and herbaceous vegetation. In the winter, food items include blueberry bushes, hemlock, bunchberry, arboreal lichens, and kelp washed ashore. Most of these plants offer little nutrition, and winter survival depends in large part on the amount of fat accumulated during the summer. 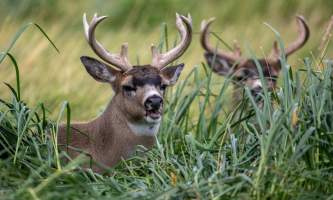 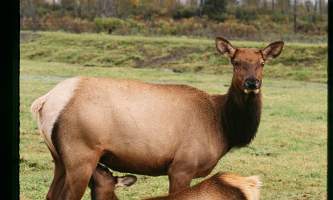