The Salty Dawg Saloon was originally one of the first cabins built here in 1897, just after the town was established. It has been a post office, railroad station, grocery store and a coal mining office. A second building was added in 1909 and it too served many purposes including a post office, store and schoolhouse. At one time, this building even house three adults and eleven children. In 1957, the Salty Dawg Saloon officially opened. The building was moved to its present location on the Spit after the 1964 earthquake. The lighthouse was added to cover a water storage tank. It’s now one of Homer’s most recognizable landmarks.

Today, a visit to the historic Salty Dawg Saloon on the spit will enhance your visit and put you in touch with many locals. Much more than a saloon, the Dawg has regular music performances and also serves light food. The "Dawg" is a favored hangout where fishermen and Spit business people meet at the end of busy, hard days to share a beverage, a bite to eat, and often great musical performances with part of the floor cleared for dancing. Fans and visitors can also buy a little book, "The Dawg's Tale," the story of the Salty Dawg, the spit and the town. In addition to history of the Dawg, it includes photos of locals taken in the saloon as well as interesting quotes overheard in the bar.

The walls and ceilings are adorned with paper money (that started when fishermen pinned up notes and drink money for other fishermen still at sea), life rings, some of which serve as memorials to fishermen lost at sea and others who were well loved and respected. Also adorning the walls are other maritime trophies, some from boats that went down at sea. Many visitors make the Dawg a must-see stop to revel in the local maritime flavor so graphically and poignantly displayed. It's a popular hangout even for people who don't drink alcohol but just want to sample the essence of Homer. 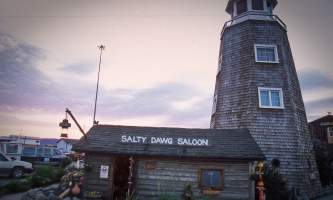 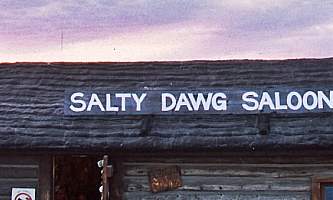