2020 Edit: Snickers is no longer with us, but all information in the audio guide about porcupines is accurate.

Snickers' was actually a failed domestication attempt. Snickers' home at the wildlife center was fashioned after a family’s kitchen cupboards. The family that Snickers had come from told us that Snicker’s favorite spot to sleep in overnight was actually their kitchen cabinets.

Typically when you tell people about porcupines, they’ve got a large fear of quills. Throwing or shooting quills -- well we are here to disprove that rumor. Porcupines do not have the ability shoot or throw their quills. You need to physically come into contact with a porcupine to feel any ill effects of a quill.

Porcupines are originally not native to the state of Alaska as they migrated up from South America. Now in the state they are quite over populated, even killing large portions of forests.

Porcupines are arboreal, as they’ll spend approximately 70% of their lives in trees. However, they are not particularity well adapted climbers. They’ll move head first up into trees, and back down out of trees, in a similar fashion to a human backing down off a ladder. For this reason approximately one in every three wild porcupine will have one, if not multiple, fractures on their body because they regularly fall out of trees.

Porcupines are strict vegetarians, sometimes living off just a single tree for a winter. Given the opportunity, they will like a variety of fruits and vegetables. Snickers' favorite food is corn-on-the-cob.

Porcupines do have a large sodium deficiency, and given the time outside of trees, you can normally find porcupines based on where they can find that salt or sodium. In the fall you can find porcupines in the field trying to find recently shed antlers, and in the winter you will find some porcupines making their way to the road systems hoping that we are using salt to de-ice the roads.

Now in addition to their sodium deficiency, porcupines also have an access of iron in their body presenting them with those very orange teeth. Orange teeth is actual a sign of good health for porcupines. As the older they get, the oranger their teeth will tend to get over time. 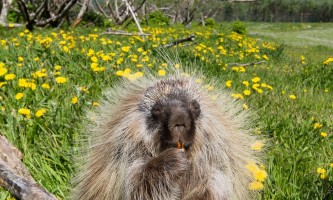 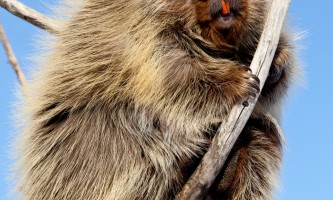 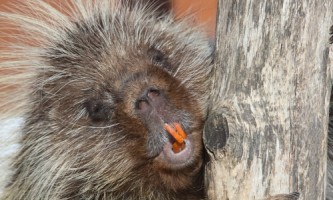