The Noatak River flows through the largest undisturbed watershed in North America and is listed as an International Biosphere Reserve as well as having a National Wild and Scenic River status. It starts in the dramatic, granitic, Endicott and Schwatka Mountains in the Gates of the Arctic National Park of the Brooks Range, flowing along at a leisurely pace in a westerly direction for 300 miles, then turning to the south for another 100 miles, within the Noatak National Preserve. The upper 60 miles are in the dramatic mountain alpine country. The river then proceeds through a wide tundra valley into the Grand Canyon of the Noatak and the Noatak Canyon through miles of rolling hills to its mouth at Kotzebue Sound. It is a clear, arctic river with excellent fishing opportunities and with great wildlife viewing opportunities of bear, sheep, caribou, and musk ox. It begins in the mountains and the arctic bogs, eventually flowing back to the white spruce forest of western Alaska where Inupiat life has existed for millennia. The Noatak River basin is one of the world's finest remaining vast wilderness areas.
Most groups use canoes or inflatable kayaks for this journey, although small rafts could suffice. There are two sections of river with rapids to be aware of but nothing that is above Class II except when the river is full from rainfall. Canoes do tip over occasionally, so proper packing is essential but at normal water levels it is an easy, pleasant float. The river has several stretches that can be done in as little as a week but most full length trips can take up to 28 days. At some point, if not all the way, mosquitoes will converge on you so bug tents, repellants, and head nets are useful.

There are two options for starting this amazing river journey. The most common departure point is from Bettles, Alaska and there are several flight operators there who can fly you and possibly rent you canoes. If you are planning to just float the upper, mountainous half of the river, this is the best place to start from. If you are planning to float the entire 375 to 400 miles you might think about starting from Kotzebue, which is closer to where you will finish.
However, the 2-hour flight in from Bettles through the Endicott Mountains and the Arrigetch Peaks is truly breathtaking and is a reason in itself for starting your trip there. Both Bettles and Kotzebue are serviced by commercial airlines from Fairbanks or Anchorage. There are regularly scheduled flights into Bettles and Kotzebue where you then need to connect with a local air charter service to take you to your planned starting point. The normal put in site is a still water slough just below the confluence of Twelve Mile creek and is called Twelve Mile Slough. The flight in is truly dramatic as you fly through the high granite spires and past the 8510 foot Mt Igikpak. This place does involve a bit of work carrying gear, as the slough is not connected to the river. A portage trail exists that leads the 200 yards across tundra to a beach where boats can be assembled, inflated etc.
For anyone not interested in the beautiful headwaters and instead wants the wide valley of the lower river then there is a strip at the confluence with the Cutler River where you could start.

The take out options are several. For those interested in the upper reaches where views of the Endicott and Schwatka Mountains are breathtaking, and the hiking is at its finest, the weeklong trip from Twelve Mile Slough to Lake Matcharak is a real classic. Lake Matcharak is a large lake, full of northern pike, where floatplanes will land to take you back to Bettles. It is along river right and involves a short carry of gear to the pickup beach. To add additional days to the trip one could float another week to the gravel strip near the confluence with the Cutler River.
For those interested in going further a much longer trip is required as the next take out is not until the village of Noatak along the right shore of the river. By going even further into the rounded and forested Igichuk Hills one could do either of two things: stop at the point where the river meets the ocean at Paul's Slough or by crossing the salt water sound, all the way to the town of Kotzebue. This can be a risky option as the winds can sometimes thwart any attempt to make the 13-mile ocean crossing in a small boat.

The flight in to this spot is world class and Twelve Mile Slough is a beautiful location. A 200-yard carry is needed to get your gear to the Noatak riverbank. Here you will find alpine tundra and easy mountain ridge hikes up into the Dall's Sheep country. Many lakes dot the landscape and willows and balsam poplar are the main shrub vegetation type. Nesting birds including white phase Gyrfalcons are seen here. Camps are many and every pool has Arctic Grayling in the deep pools, eager to take lures and land in your frying pan. It is an easy 5 to 7 day trip and the river right Lake Matcharak is the common take out. This camp does see a bit of use and some groups will move into the lake and paddle to a remote spot to ease the impact at riverside. Either way a short carry of gear is needed to get to the take out beach in the lake.

Below Lake Matcharak the river begins to widen and enter wet boggy areas as it meanders along. It makes a series of S turns to the point 15 miles below Lake Matcharak where you depart the Gates of the Arctic National Park and Preserve, entering the Noatak National Preserve, and 4 miles below Douglas Creek, there are 10 miles of Class II rapids to keep you on your toes followed by a Class II+ ledge drop and then a place known as "The Jaws". Here there is a recirculating whirlpool where the river piles into the river’s right wall and makes a sharp left turn. Lining your boat is a definite option here. It becomes harder to access the mountain ridges for hiking now, with miles of string bogs to negotiate in order to get to dry ground. The river flows general NNW to a point where then it turns SSW, then due west as it reaches the confluence with the Cutler River where a gravel strip is the common take out.

For those more interested in the lower Noatak Basin where the Western Arctic caribou herd roams, this is the logical starting point. The river is still wide and meanders constantly as it swings back to a NNW course to cross the N68 degree latitude and then turns west to a point past the Nimiukiuk River. Here the river begins its southerly run into the Grand Canyon and Noatak Canyon of the Noatak River, a 70-mile stretch of a single channel of water with deep pools full of grayling and cliffs of nesting peregrine falcons and some small Class II ledges to avoid. At a point where you recross the N68 degree latitude going south you are entering this region. Some good hiking exists here and eventually you, again, recross the 68-degree mark with the Noatak Canyon coming soon after the last south flowing stretch to cross the 68-degree latitude. Watch for a Class II+ ledge that you can skirt, before the canyon. It has a strong eddy line to be aware of. After the Noatak Canyon, the river again runs N and NNW till it finally swings to the SSW course that will take you back into the deeper spruce forest and eventually to the village of Noatak that sits on the right bank. Be well to the right as you approach or you could miss the take out.

Noatak Village to the Ocean: 65 miles

Below the village of Noatak the river is still confined to a single channel mostly and running SSW to the village of Nauyoaruk where it then turns back to the east ten miles or so, finally turning south and then east to south one more time for the final few miles to its mouth along the Kotzebue Sound. There is a take out here known by some as St. Paul's Slough and is where a floatplane can pick you up. With good organization a boat could pick you up at the river mouth for the 13-mile trip to Kotzebue.
It should be noted here that the 13-mile crossing of Kotzebue Sound can be life threatening in bad weather and at no time is it recommended to try to paddle a raft across.

The main advice to heed is related to how the river can come up quickly after rains and suddenly what had been the easy Class II river is now a challenging Class III+ and care should be used when proceeding after the river has risen. Also to note is how strong upriver winds are often encountered, especially on the lower sections of river.

Don't forget that this is grizzly bear country and food storage and keeping a clean camp are the best defenses you have. It might be worth noting that musk ox are also fast and defensive animals and can charge quickly in defense of their family members. 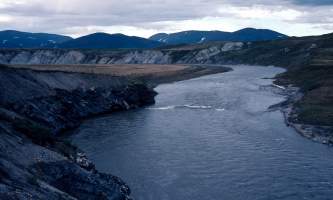 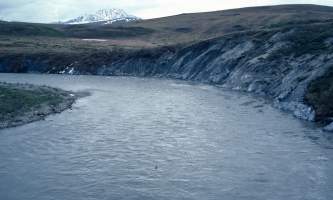 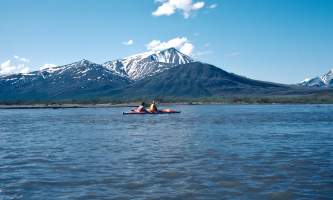 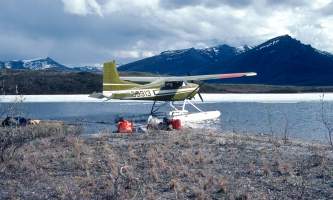 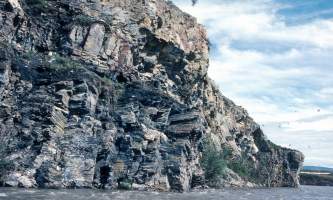 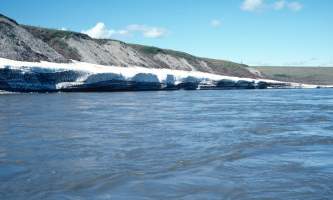 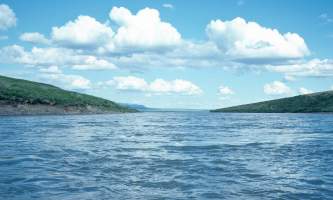 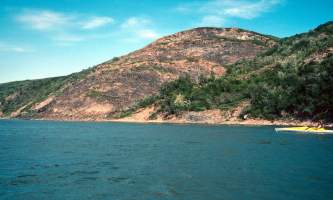 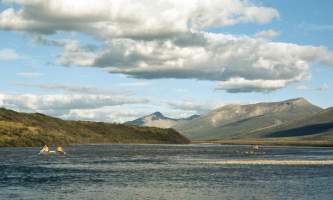 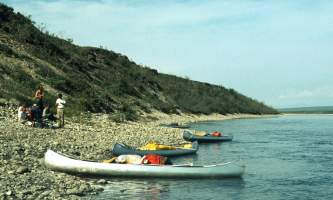 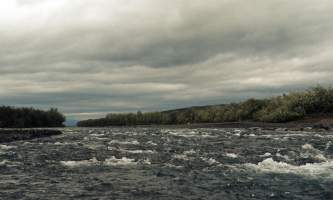 Put In Option for Noatak River

There are reg­u­lar­ly sched­uled flights into Bet­tles and Kotze­bue where you then need to con­nect with a local air char­ter ser­vice to take you to your planned start­ing point. The nor­mal put in site is a still water slough just below the con­flu­ence of Twelve Mile creek and is called Twelve Mile Slough. The flight in is tru­ly dra­mat­ic as you fly through the high gran­ite spires and past the 8510 foot Mt Igik­pak. This place does involve a bit of work…  ...more

Lake Matcharak is a large lake, full of north­ern pike, where float­planes will land to take you back to Bet­tles. It is along riv­er right and involves a short car­ry of gear to the pick­up beach. To add addi­tion­al days to the trip one could float anoth­er week to the grav­el strip near the con­flu­ence with the Cut­ler River.

Put In Option for Noatak River

For any­one not inter­est­ed in the beau­ti­ful head­wa­ters and instead wants the wide val­ley of the low­er riv­er then there is a grav­el strip at the con­flu­ence with the Cut­ler Riv­er where you could start.

Take Out Option for Aniuk River

For those inter­est­ed in see­ing some of the upper Noatak you can con­tin­ue 20 miles more to fly out of the grav­el strip at the con­flu­ence of the Cut­ler Riv­er and the Noatak River.

After the Noatak Canyon, the riv­er again runs N and NNW till it final­ly swings to the SSW course that will take you back into the deep­er spruce for­est and even­tu­al­ly to the vil­lage of Noatak that sits on the right bank. Be well to the right as you approach or you could miss the take out.

There is a take out here known by some as St. Paul’s Slough and is where a float­plane can pick you up.

With good orga­ni­za­tion a boat could pick you up at the riv­er mouth for the 13-mile trip to Kotze­bue. It should be not­ed here that the 13-mile cross­ing of Kotze­bue Sound can be life threat­en­ing in bad weath­er and at no time is it rec­om­mend­ed to try to pad­dle a raft across.