Here we are at the musk ox enclosure at the Alaska Wildlife Conservation Center. A very prehistoric looking animal, and to their credit, largely unevolved in the last 20,000 years.

Musk oxen are a ramming species. A good example of this will be in the fall, as males are preparing for the rut season.

Male musk ox will square up from 50 to 100 yards apart from one another and reach top speeds just prior to ramming heads. Male musk ox will fight for the dominance over a harem of females or a herd of musk ox. The closest comparison we have to this collision is a small to mid-size car running into a concrete barrier just under 20 miles an hour.

If one male has not established his dominance in the first bout, they will not tussle; they will simply walk 50 to 100 yards apart from each other and repeat the process all over again.

In recent years we have recorded musk ox doing this upwards of twenty times in a row.

It is atypical for musk ox to harm themselves in this process, as your average male will have approximately four inches of horn followed by an additional three inches of skull.

In early season, musk ox will shed their under layer of fur known as Qiviut. Qiviut is currently considered the richest legal fiber one can obtain in the world; it’s nine times warmer than wool and considerably softer and finer than cashmere. Qiviut is an unbelievably rich and rare fiber.

Your typical adult musk ox is going to shed between five to seven pounds of this under-layer fur, also known as Qiviut, throughout the year.

Musk ox will have babies regularly at the wildlife center every spring from April throughout May, and we will also bring in an influx of orphans throughout the summer season.

Check back in early summer and throughout the summer season for any newborn musk ox at the Alaska Wildlife Conservation Center. 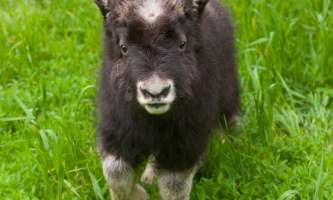 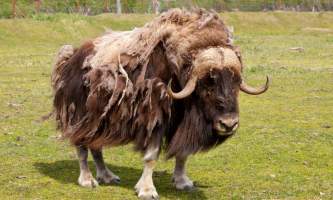 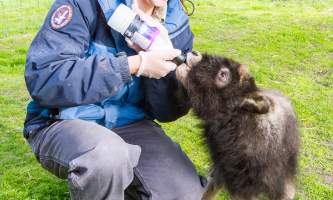