About the Audio Guide

The best Gold Rush bar in town features over 100 original reindeer and Coors beer bottles as well as some pre-Prohibition artifacts.

At the corner of 3rd and Broadway lies the Mascot Block, a row of three separate business buildings. The Mascot Saloon, on the corner, dates back to 1898. It was one of more than 80 saloons in a town once described as "the roughest place in the world." The saloon operated until August 1916, when Prohibition closed it down; it later served as a drug store. Next door sits the old Pacific Clipper Line office. Skagway was an active port both during and after the gold rush, and many buildings in this block once served as ticket offices for steamship lines. The narrow building at the south end was Hern's Liquor Store. It opened in 1937, shortly after Prohibition was lifted. The entire building, along with several others in Skagway, is now owned by the National Park Service. Each has been repainted in its original colors. Some are leased back to private businesses. The Mascot houses an exhibit and restrooms. 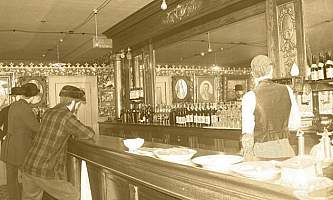