Here we are at the lynx habitat at the Alaska Wildlife Conservation Center. During certain times of the year, guests may need to be extra cautious when standing near the fence line. This is a purely hygienic recommendation, sometimes our lynx get “spray happy” and believe me when I say you wouldn’t want to be misidentified as pungent skunk when getting back into the vehicle for the ride home.

The common name for lynx in Alaska is Canadian Lynx. Males are known as “toms,” while females are referenced as “mollies.” Size varies with males reaching 35 pounds, females coming in 5 to 10 pounds smaller on average. However, their paws are their extreme distinguishing characteristic, as they can be similar in size to a 200-pound cougar, or mountain lion’s paws.

It’s the extreme size of those paws and pads that allow lynx the flexibility to go into different environments and different eco-systems in the state of Alaska. They will use those paws to be able to maneuver in water, on rock, and it will almost resemble a snowshoe in enough snowpack. With these large paws a lynx home range can exceed 1000 miles, meaning a lynx we see in Alaska may also live in Canada. 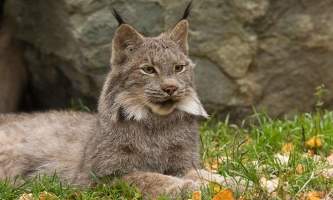 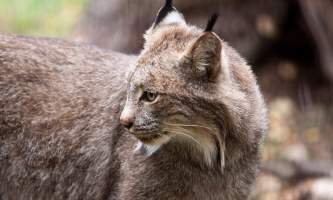