Drain Creek to the Gorge: 16 miles

The upper section is all shallow braids where the river winds its way through the British Mountains, an area of beautiful limestone cliffs rich with fossils. This is an area of some of the best high ridge hikes that are accessible from most camps. There are several good campsites that are just downriver of the landing strip making it fairly easy to launch the same day if there is another group at the landing strip. One of finest hikes is the ridge that runs away from river right just north of the drainage across from Drain Creek. This is about 6 miles below the strip. One of the biggest challenges here is negotiating the extensive stretches of aufeis; areas of winter ice that can fill the river valley and cause the river to flow through ice walled channels that sometimes require scouting to make sure the river doesn't flow under the ice!

The middle section of river is a short stretch of river where the more resistant shale rocks form a gorge past Mount Greenough, the high peak of this area. The rapids are normally only Class II to III but high water can raise the difficulty at times. There are 3 distinct sections of boulder gardens to negotiate. Some of the most spectacular geology is found along here where the harder rock type creates the gorge. The gorge can be scouted and is best done from the right shore. The first rapid is considered the trickiest with a log line down the center then right of center, all the while trying to line up for a final plunge over a small ledge that is best taken on the left, away from the right side wall. It is common to get hung up in rafts here and rafters have become swimmers when they weren't hanging on well enough. Some call this Eddy Out rapid because that is where Eddy fell out of a boat. It is wise to pull over on the right well above the rapid at GPS N 69.21 degrees by W 141.85 and walk down and scout it. It is a long rapid of boulder dodging while not giving up the middle lane of water. A mile further is the second rapid and is another boulder garden with the biggest danger just getting horribly stuck in the rocks, which means someone will get wet trying to get off the rocks. Enter this one on the left, stay middle past a Volkswagen sized rock and move back over to the right to exit. The 3rd rapid is a short run through the boulder pile at the mouth of the big tributary entering from the left. This ends the canyon rapids even though the black mountains continue to rear high and the water is swift and rocky.

The Gorge to Caribou Pass: 27 miles

Once past the rapids there is a dramatic mountain landscape on both sides of the river with lots of sheep on the slopes. There are several excellent clear water stream campsites with good Char and Grayling fishing along here. This third section of river is, again, shallow braids that flow past Whale Mountain, through an area rich in wildlife and past many steep, riverside bluffs covered with Dall's Sheep and eagle nests. Musk oxen have been seen numerous times in this section of river. Once past the black shale mountains of the gorge, you enter another area of open country and limestone mountains. There are many good campsites along here and it is an area where wolf packs are known to den. If you find a den, please do not approach it as the adults will abandon the den and take the pups away to, likely, an inferior spot. Past Whale Mountain you will see the Pagilak River entering from river right and, a few miles further, the Paulatuk River will join from river right. This means you are only 3 miles from Caribou Pass, a valley that runs east from the river and connects to the coastal plains. There is a small stream that enters on river right and has a nice camp but is often not accessible as the river will not go there. Just past it, the river channels come together and there are campsites just below it. The old take out airstrip is here on the river right tundra bench but erosion has taken much of it away and planes will not take off with loads from it any more. Camping here is good however and there is a great hike up onto the nearby mountains with great views out across the Arctic Ocean at Demarcation Bay. For the take out you now have to float a mile downstream and stop on river left at the gravel bar landing area. Most groups camp above then get up early throw everything in loose and float the short distance to where the strip is. It is usually marked with orange surveyors tape.

The fourth section is the stretch from Caribou Pass to Icy Reef at the edge of the Beaufort Sea. This stretch is often non-traversable as the aufeis can create an impenetrable barrier and requires diligent route finding and sometimes portaging gear away from hazardous channels. Even if one makes it to Icy Reef the threat of being stranded by ice fog is high and planes will not be able to land and pick you up. It is recommended to have extra days built into your schedule if you plan on going to the coast. This is in case the ground fog makes pickup by plane impossible.

In general, this is an area of unpredictable weather. It is often clear and sunny and can cause tents, especially yellow colored ones, to get too hot for sleeping. Yet there are often snowstorms that will collapse a tent that isn't properly pitched. The birdlife and wildlife are highlights for the trips done in June, with the caribou migration a spectacular event to witness. It might require having a down jacket or some other extra outer layer in June, however. In August, the highlights are often fishing and colorful fall colors. The month of July is the month of mosquitos so head nets and bug jackets are important items to have with you then. At all times one must realize the isolated wilderness location means any evacuation will be time consuming and difficult so it should be well noted that one needs a proper wilderness attitude complete with a rescue option. Satellite phones are becoming the go to item for emergencies.

Special note: It is not uncommon for people en route to the put in to be stranded in Arctic Village the first night. Weather can do it, flight logistics can do it. So extra effort is needed to make sure that whoever is left at Arctic Village for the last flight is left with tents, sleeping bags and some food. The same goes for whoever is on the first flight in. They should have a tent, sleeping bag and food in case of unplanned delays. 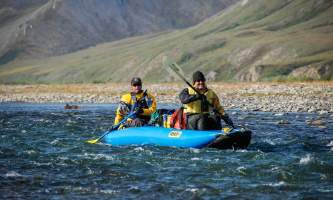 Take Out Option for Kon­gakut River

The old take out airstrip is here on the riv­er right tun­dra bench but ero­sion has tak­en much of it away and planes will not take off with loads from it any more. For the take out you now have to float a mile down­stream and stop on riv­er left at the grav­el bar land­ing area. Most groups camp above then get up ear­ly throw every­thing in loose and float the short dis­tance to where the strip is. It is usu­al­ly marked with orange sur­vey­ors tape.

Put In Option for Kon­gakut River

Char­ter a wheel plane to drop you off here.

Take Out Option for Kon­gakut River

Even if one makes it to Icy Reef the threat of being strand­ed by ice fog is high and planes will not be able to land and pick you up. It is rec­om­mend­ed to have extra days built into your sched­ule if you plan on going to the coast. This is in case the ground fog makes pick­up by plane impossible.