Here we are at the elk habitat at the Alaska Wildlife Conservation Center.

The word “elk” is an interesting one in the English language. In English-speaking Europe, “elk” is the word used for the animal that North Americans refer to as a moose. Elk are not the largest members of the deer family but come in at a close second behind the moose. When calves are born they are covered in spots and weigh only 20 to 25 pounds. Females can grow to be 7 or 800 pounds, and males can weigh as much as 1300 pounds!

Elk are not native to Alaska in historical times. The last native elk were found in interior Alaska during the Pleistocene or “Ice Age” era and died out many thousands of years ago. Modern elk populations were derived from Washington and Oregon elk being transplanted to islands in southeast Alaska and those neighboring Kodiak Island in the Gulf of Alaska.

The source population for AWCC’s elk originates from the Yukon Game Farm (now the Yukon Wildlife Preserve) outside of Whitehorse, Yukon Territory, Canada. Over the years, additional animals from other ranches have augmented the Center’s genetics. The elk were brought here in order to be part of a release program for Alaska, but the population now living at AWCC serve as ambassadors for their wild counterparts in Alaska.

Aside from their white rump, another distinguishing feature of elk is their extreme antler growth. Males will shed antlers every single year and simply regrow them the following spring. The size of the antlers is not the product of one’s age, but the amount of testosterone in the male’s body. In the early portion of the season, the elk antlers growth is enabled by a thin layer of skin that grows on their antlers, also known as velvet. It’s this velvet that brings blood and nutrients to this bone enabling it to grow at such an incredible pace. This velvet protects the growing tissue before the cartilage tissue ossifies, turning to bone and ready for rut. Upon rutting season, you will hear the iconic “bugling” sound the bulls will make as they challenge other bulls for breeding rights to a harem, or cow group, of females. 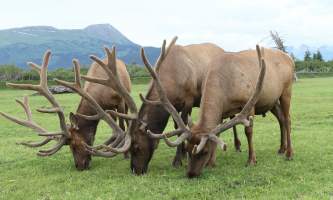 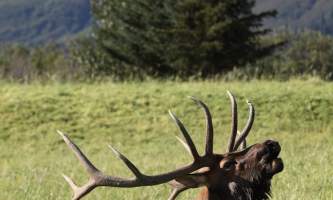