Pastoral is the word here. This 300-acre park on Anchorage’s near-east side features groomed paths over the gentle fairways of a snow-bound golf course. Loops explore a handsome forest with several bridges that cross (and recross) a meandering spring-fed creek. Most of the main groomed trails are lit or near lights, and are very popular with new and younger skiers. Still, you can find plenty of hills if you want them, plus a more challenging classic-style loop in the north-side forest.

Novices should park by the Selkregg Chalet and try out the fairway loops running north and south under the golf course lights. A 2.5-kilometer loop follows the summer multi-use trail east and north, ultimately emerging at the upper end of the fairway. An old loop to former picnic areas climbs to one of the highest points in East Anchorage and connects to other trails in the forest.

To test your skills on a couple of long descents through dense forest, take the tunnel to the north side. A 2.5 kilometer-loop set for classic skiing with parallel tracks winds through these woods, emerging on the multi-use trail in the park’s north end. This route feels remote, as though you are far from the city. No lights in the woods that side.

Except for ski race prep days, when the Nordic Ski Club of Anchorage sends a groomer, the park’s trails are maintained by the Anchorage Parks and Recreation. Although the park is officially signed for “classic only” technique, in practice, people and ski team kids regularly skate ski on the south side trails, especially on the fairways and the multi-use links. The north side, however, is almost always limited to classic technique.

One of Anchorage’s oldest parks, Russian Jack takes its name from a Russian immigrant who homesteaded the land in the 1930s. The Middle Fork of Chester Creek burbles from the ground in the forest east of the Chalet and runs clear all winter. The park features one of the city’s most well known sledding runs. Running south from the base of the sledding hill is the popular lighted trail link to Alaska Pacific University and Chester Creek and beyond. Once the snow is in and the trails are packed, you could start at Russian Jack and ski across the entire city.

The park sprawls north and south of Debarr Road (each half connected by a tunnel that gets filled with skiable snow when possible) with Boniface Parkway defining its eastern border. Take DeBarr Road east from downtown, then turn south into Russian Jack halfway between Pine Street and Boniface Boulevard, about a quarter mile from either cross street. Parking can be found along the access road or at the Selkregg Chalet to the south. Another entrance is off Boniface Parkway about quarter mile south from the intersection with DeBarr Road. North side trails can be accessed at 127 Pine St. north of Debarr Road at the softball and soccer sports complex. 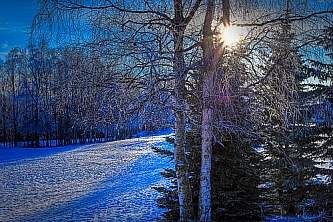