Here we are at the coyote enclosure at the Alaska Wildlife Conservation Center.

Coyotes are another member of the canid family residing at the AWCC. They are dubbed the most vocal of the canids and are sometimes referred to as the “song dog.” Coyotes average in size from 30 to 40 pounds, males typically weighing more than females. Coyotes are fairly new to Alaska, and only began to show up in the early 1900s when they started appearing in SE Alaska. The peak of Alaskan populations occurred in 1940 and has since stabilized to a healthy number.

The coyote is omnivorous with an emphasis on carnivory, and best described as an opportunistic feeder. In Alaska, snowshoe hares, voles, and carrion comprise the bulk of the coyotes’ diet while marmots, ground squirrels, muskrats, fish, insects, and Dall sheep are taken in fewer numbers. Studies show that coyotes will even hunt porcupine when hare abundance is low.

Not getting too comfortable, the coyotes can sometimes find themselves on the opposite end of the dinner table. Great horned owls, bald and golden eagles, wolves and bears have all been known to prey on coyotes. Due to this middle-ground the coyote holds on the food chain, they are quite skittish and on constant alert. 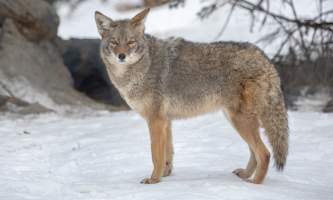