The Chulitna River flows to the south out of a huge valley from Broad Pass, one of only two breaks in the Alaska Range Mountains, where the highway, the train, the geese, and the river, all pass on their way to Cook Inlet. It offers a chance for a float of 75 miles and can take as little as 3 days in kayaks but can be a nice 4 or 5-day trip. Canoes and kayaks are fun on the upper but tippy on the lower section. There are three forks of the upper Chulitna and the East and Middle Forks see floaters during mid to late summer months. Like most rivers flowing out of Broad Pass from the south, it is a major salmon stream, so fishing is one of the primary attractions for floating either one. It is not likely to be the occasional tree wads and logjams that you'll drag your boat over in the first few miles. Once the West Fork joins, suddenly, the small clear rocky stream, strewn with logjams is a big gray glacial river with strong eddy lines and big holes. Both the East Fork or West Fork have only a 5- to 12-mile stretch to their confluence where the river doubles and when the West Fork joins it doubles again.

It is the George Parks Highway, Highway #3, which crosses the East and Middle Forks of the Chulitna. Mile 185.1 is the start for the East Fork and here the river is small and rocky with the potential for occasional channel spanning obstacles to get past. Mile 194.5 is the start for the longer West Fork section, 12 miles to where the confluence with the East Fork is. The West Fork drains the big glacier country of the south and east side of Denali and has no real put in site.

The take out is normally the Chulitna Bridge of the Parks Highway at mile 132.8 and by this point the river is flowing big and getting pulled over and stopped can be tricky sometimes. But the left side of the river, just above the bridge, is the best access. You could float all the way to where it joins the Susitna River and start getting left to make a beach takeout at the town of Talkeetna. The railroad bridge marks the place just above the gravel beach.

The East Fork and West Forks: 5 and 12 miles

The East Fork has a little more water and fewer obstacles than the Middle Fork in its 5-mile run to their confluence. The river is clear, with riffles that spill into small pools. There is one short spot of Class II upstream of the Alaska Railroad bridge, but has no real difficulties that aren't negotiable. The Middle Fork is a longer section, 12 miles, but has little water at normal flows and does have the potential for logjams in several places. As a result, it is much more suitable for kayaks than for a rafting party, unless it is a small 12 to 14 footer and you are willing to walk it along through the shallow riffles.

From the confluence of the East and Middle Fork, the river resumes its shallow and clear nature even though the volume will have doubled at this point and the logjams are less of an effort to avoid. Soon after, you will see where Honolulu Creek enters from the left of the river and suddenly the much bigger and gray West Fork comes booming in from the right to join the river and the combined flow is now a strong, pushy freezing cold river. For several miles, the river twists and turns, eventually entering a steep sided canyon and Hurricane Gulch tributary, again, from the left.

For several miles the river, twists and turns, eventually entering a steep sided canyon and Hurricane Gulch tributary, again, from the left side of the river. High rock walls and interesting geology keep pulling your eyes from the river in here, but watch out for the strong hydraulics along the walls and points of land if you are in a small boat. There are even times during hot summer months when the West Fork is a river of such great size that extreme care is needed and kayakers have been known to abort and climb the walls out to the Parks Highway, rather than risk upsetting and losing their kayak or risking a nasty swim. All the tributaries on the right side of the river are draining the big glaciers of the south side of the Alaska Range and the volume increases each mile. The views of Denali will become majestic on a clear day and the entire range seems to tower over you. About 15 miles below Hurricane Gulch the Fountain River will enter. It is another big glacial river and is the biggest tributary you have seen so far. Entering from the right side of the river, about 38 miles from the East Fork put in, are views of the Hidden River Valley, as it empties out of the Buckskin Glacier. This river can be as big as the Chulitna at times so be ready for more strong hydraulics as the 6- to 8-mile an hour current sweeps you along. After another 12 miles, the Tokositna River enters again from the mountains on the right side of the river. The river pinches closed a bit here and the current is strong. Not much further is the Troublesome Creek confluence and for the next 10 miles the river is a single, big water channel. The valley has become really wide now and the views of the Alaska Range are incredible. It is only 3 or 4 more miles to the take out at the Parks Highway bridge at mile 132.8.
By floating past this bridge you have committed to the extra 20-mile float to Talkeetna. The Chulitna will join the Susitna where you will want to start staying to the left and after you join the Talkeetna River, watch for the railroad bridge just above the take out beach near town. 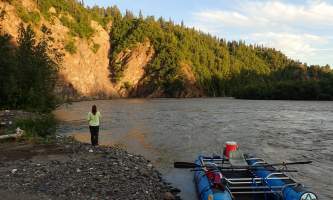 Put In Option for Chulit­na River

Mile 185.1 is the start for the East Fork and here the riv­er is small and rocky with the poten­tial for occa­sion­al chan­nel span­ning obsta­cles to get past.

Put In Option for Chulit­na River

Mile 194.5 is the start for the longer West Fork sec­tion, 12 miles to where the con­flu­ence with the East Fork is. The West Fork drains the big glac­i­er coun­try of the south and east side of Denali and has no real put in site.

Overview The Tal­keet­na Riv­er is, accord­ing to almost every guide­book or ref­er­ence you may con­sult, the most clas­sic, wilder­ness, white­wa­ter trip in Alas­ka. Its remote loca­tion, steep, fast-water canyon, abun­dant fish­ing and wildlife view­ing make it one of the true clas­sics for sure. It requires a bush plane to fly into the Tal­keet­na Moun­tains where there are huge views of the high­est peak in North Amer­i­ca, Denali, and in the head­wa­ters area…  ...more