Here we are at the reindeer enclosure at the Alaska Wildlife Conservation Center.

Now before we get started, caribou and reindeer are in essence the exact same animal. Reindeer are simply given the term "reindeer" because of domestication, whereas caribou are their wild counterparts.

People have been domesticating caribou for over 7,000 years with it originally taking place in Scandinavia. Over time, reindeer in captivity will tend to be smaller and stockier, whereas caribou in the wild will have a more significant and developed antler system.

Caribou are also the only member of the deer family where both males and females will grow and shed their antler.

Male caribou or reindeer will shed their rack of antlers after the fall or rut season. However, female caribou or reindeer will tend to carry their rack of antlers throughout a majority of the winter, except if they are pregnant, in which case they will not shed their antlers until after giving birth. For this reason, it is a little known fact that all of Santa’s reindeer would have been female, as male reindeer or caribou would shed their antlers before December 25th.

Another interesting fact about the caribou, or the reindeer, is their split hoof or their "du-claw". Caribou or reindeer on hard terrain will elevate themselves on to the front portion of their split hoof, or their du-claw, almost resembling a woman in high heels. In marshier, boggy type terrain, reindeer or caribou will sit down utilizing the entirety of that split hoof, almost resembling that of a snow shoe.

Another interesting fact about caribou: they actually out populate people in the state of Alaska nearly 1.5 to 1. 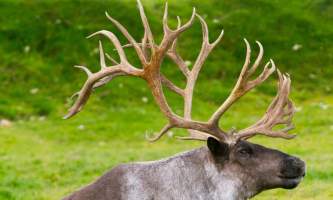 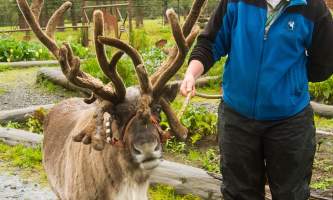 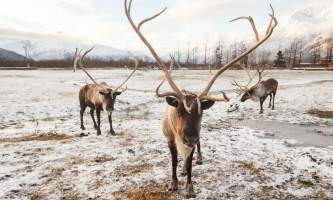