Here we are at the brown bear enclosure at the Alaska Wildlife Conservation Center.

It is important to the Wildlife Conservation Center to have wild, natural spaces for our animals, and the brown bear exhibit currently settling in just over 18 acres is the largest bear exhibit in all of the United States.

Dictated by physically where they are located in the state, Grizzly Bears are simply interior brown bears. Coastal Brown Bears will be found in South Central Alaska predominantly along the coast lines, and Kodiaks’ will be the largest of the three, isolated on Kodiak and some of the surrounding islands.

Now, to the three brown bears at the Alaska Wildlife Conservation Center. Hugo is the lone Grizzly of the three; she was orphaned in the year 2000 from Hugo Mountain in Northern Alaska. Being an interior brown bear, Hugo again is a Grizzly. Joe Boxer & Patron were orphaned from Willow, Alaska in the year 2004 after their mother had been shot in defense of life and property.

Check back in the fall, as our brown bears will add weight through the entirety of the summer season. In September, Joe Boxer, our dominant male brown bear, will regularly exceed 1,000 pounds and is estimated to top out at 1,100 pounds as a mature adult.

The brown bears at the Alaska Wildlife Conservation Center are also quite famous having starred in a variety of television shows, movies, as well as a few commercials. 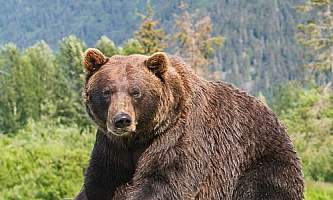 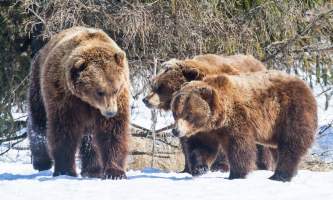 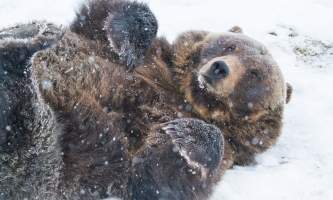 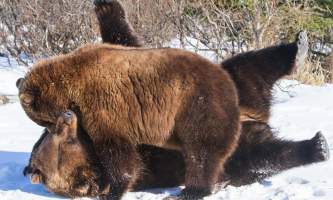