2020 Edit: Hooty no longer with us, but all information in the audio guide about owls is accurate.

The Alaska Wildlife Conservation Center is also home to a variety of birds.

Adonis the Bald Eagle was one of the first animals to come to the Wildlife Conservation Center, originally arriving in 1995. Adonis was a victim of a shooting that unfortunately required a full left wing amputation.

Since the Bald Eagle population has rebounded in such a healthy form in the lower 48 states, the United States government actually no longer goes through the process of amputations for Bald Eagles.

Credited largely to their amazing eyesight, Bald Eagles are phenomenally well-adapted predators in the state of Alaska. It is a well-known fact that Bald Eagles can see something as small as a several pound salmon, mid-stream, from over a mile away, mid-flight.

It is a little known fact that Great Horned Owls do not have the opportunity to move their eyes. They are fixed in their heads. Proportionally, if humans eyes were as large as the Great Horned Owls', they would be the same size as a grapefruit or a softball.

Hooty and Snappy are both partial amputees as well, and all three of the birds are permanent residents at the Wildlife Conservation Center.

While visiting the Wildlife Center’s campus, it is also common to see a variety of Bald Eagles, ducks, magpies and crows. 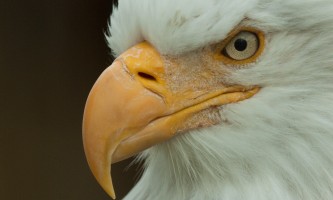