The Alagnak river, a federally designated Wild and Scenic River that originates in Katmai National Park and Preserve, is a fisherman's paradise and the most popular fishing float trip in the Bristol Bay region. From it's headwaters at Kukaklek or Nonvianuk Lake, it is a 75 mile Class I and II river with one Class III canyon that is a mile long and has a short falls, not easily portaged or lined due to the steep walls. The river is a good family and friends float trip that has fishing as a centerpiece activity. There are some hikes across the tundra of the lakes area and upper river, with tree-lined banks in the middle and lower reaches. It is a popular destination for day fishing for the many lodges in the area but is a wonderful 6-day trip with moderate whitewater and is suitable for rafts and inflatable kayaks for those with paddling experience. This area is filled with Alaskan Brown Bears and is remote wilderness even with the fact you will see other people along the way.

The put in involves flying a regularly scheduled flight from Anchorage to King Salmon where you can find a charter flight service to fly you by floatplane to one of the two headwater lakes. The 75-mile trip that has the Class III canyon begins out of Kukaklek Lake and is best done in small rafts. If you don't want to have to line or portage your kayaks through the Canyon, start at Nonvianuk Lake and float the 11 miles of Nonvianuk River to where it joins the Kukaklek outflow. Added to the remaining 56 miles gives you a 67-mile trip.

The take out is normally by floatplane from the deep-water sections of the last 10 to 30 miles. Your pilots will likely show you where they will want you to be. The last 10 miles of river can be affected by both tide and westerly winds but you could paddle on to the Kvichak River and on down to where it merges into the Kvichak Delta to the abandoned village of Hallersville where there is a gravel strip at the abandoned cannery that is there or at the village of Kvichak.

Headwater Lakes to Confluence: 11 or 19 miles

The most common starting point is from Kukalek Lake and is a 19-mile run with the canyon at mile 15. The other starting point is from Nonvianuk Lake and is an 11-mile run without the Class III canyon. In the area of Kukalek Lake, you are in the rolling hills and there are some nice tundra hikes that can be done from this area. Once you exit the lake it runs west first then south where it passes the entrance/outflow of another small lake to the south before finally becoming a swift rocky stream with a moderately paced current at around 3 to 5 mph. This area is dry tundra with nice views of surrounding countryside. After 6 miles the river becomes enclosed by spruce forest and runs through shallow Class II boulder gardens with the current picking up to 6 mph as it winds and turns on its approach to the small canyon that will start at GPS N 59.06 degrees by W 155.75. The river swings from a westerly course to a southerly one as it approaches the canyon. Within a mile there are several Class II rapids with the short "falls' coming rapidly. Kayaks will want to line here and everyone should stop to scout and see that the run has no sweepers or logjams in it. Due to the steep walls, lining is not easy and portaging is even harder so you should be prepared to run this. In rafts this is no problem. Kayakers should have solid paddling skills to keep from tipping and being washed over the falls, which comes quickly. Beyond the canyon is 5 miles of swift but nontechnical water to where the confluence of the two lake streams meet. If you choose to start at Nonvianuk Lake the run is 11 miles of Class II river. The outlet of this lake is one of the most popular fishing spots and will likely be crowded with fishermen and floatplanes. The Nonvianuk River has no Class III canyon to negotiate and is similar in that it flows through the dry tundra hills and ridges to where it meets the outflow of Kukalek Lake.

Confluence through the Braids: 15 miles

From this point the river opens up and heads west in a much bigger valley. For 15 miles the river swings through a braided river channel, where wading and fishing is ideal on the gravel areas near tributary mouths. There are brushy islands and long gravel bars with only Class I water to contend with. The first mile is a single channel but soon the valley widens and gravel bars separate the river into channels. For 3 miles the river glides along with small channels to choose from. There are several major forks where you might be able to go either way, but odds are better when you stay with the main current. For 6 miles the river runs west to where you will see on the left a fishing lodge at GPS N 59.00 degrees by W 156.03 degrees. After 10 miles the river runs a northwesterly course for 2 miles then heads west again. Slowly, the river runs the last bit turning more north with each mile.

The lower 40 miles of river are more enclosed by forest and it meanders among downed trees with brushy banks in a wide river channel. There may likely be powerboats along this section of river as well as semi-permanent tent camps. The river is 75 feet wide at times and the banks are grassy but dry enough for tent sites in most areas. Here, the river runs due north for 2 miles and along here, just through the brush on the left of the river, are miles of dry riverbed from back when the Alagnak was bigger and flowing over there. There are some nice dry walks to go on there, but be watchful of bears. The river braids more and the banks are brushier once the river starts westward again. But after 2 or 3 miles of this, the river becomes more single or double channeled and is deep, clear and full of fish. The bears are numerous anywhere at anytime along here. There is another fishing lodge with an airstrip at GPS N 59.09 degrees by W 156.46 on the left of the river where the river begins turning to the south. The river turns due south for a final time then westward again to where the last 10 miles of river are tidally influenced with slow to no current. This is why it is best to get picked up by floatplane along here rather than floating further. The final 10-mile stretch begins about GPS N 59.03 degrees by W 156.68 degrees. There is an airstrip at the abandoned village of Hallersville at the confluence or at Kvichak a mile and a half down the Kvichak River on the left of the river at GPS N 58.97 degrees by W 156.93. 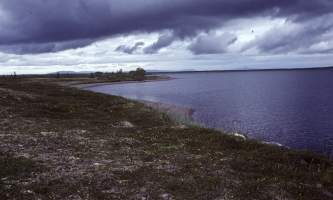 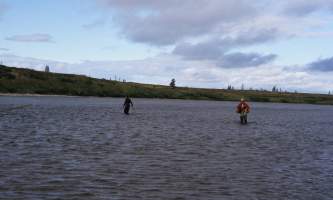 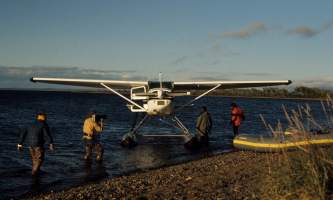 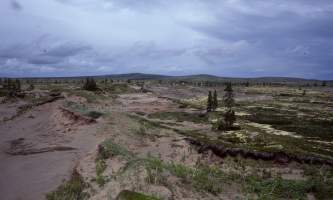 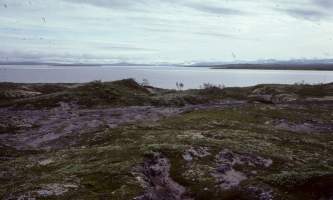 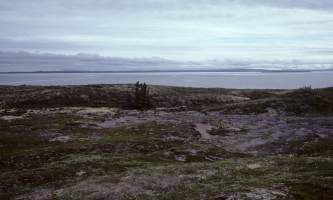 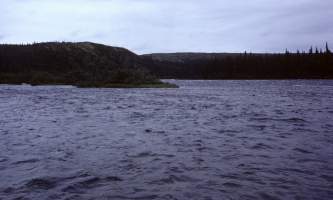 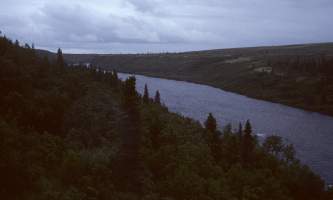 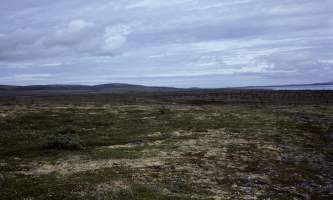 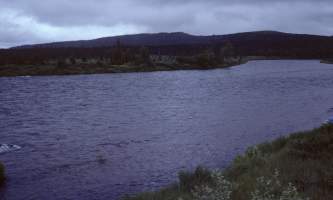 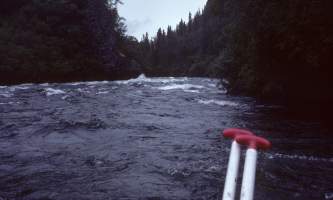 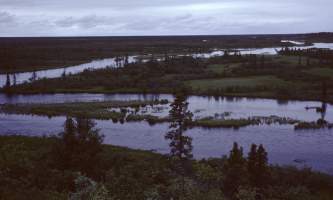 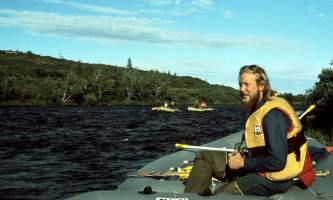 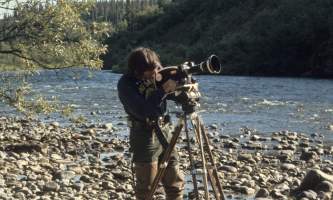 Put In Option for Alagnak River

Take a float­plane from King Salmon, Alas­ka. This part of the trip is best done in small rafts.

Put In Option for Alagnak River

If you don’t want to have to line or portage your kayaks through the Canyon, take a float­plane to Non­vianuk Lake and float the 11 miles of Non­vianuk Riv­er to where it joins the Kukak­lek outflow.

Take Out Option for Alagnak River

There is a grav­el strip here where a wheelplane could pick you up.

Other Advice for the Alagnak River

Be sure and have your pilot show you where you will take out as you fly upriv­er to the start.…

Other Advice for the Alagnak River