Soldotna knows how to throw a party. They're so good at it in fact, that each Wednesday from June - August, the Levitt Amp Soldotna Music Series puts on a free concert in Soldotna Creek Park, following the popular Wednesday Market. This weekly events draws the locals, as well as Alaskans from neighboring communities.

The annual Soldotna Progress Days held the fourth weekend in July is the longest-running community event, celebrating the population boom in Soldotna over 60 years ago.

And the Frozen RiverFest is an outdoor beer festival -- in February! Sounds crazy? Maybe. But that's part of the fun!

Free out­door con­certs in Sol­dot­na Creek Park every wednes­day from June through August. 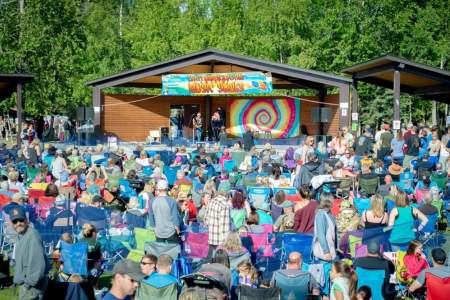 Sum­mer Wednes­day evenings in Sol­dot­na are times that every­one looks for­ward to. That’s when the famous — and free! — Levitt AMP Sol­dot­na Music Series takes place in the beau­ti­ful Sol­dot­na Creek Park. It hap­pens week­ly from June through August, and on top of catch­ing some great music, it’s a fan­tas­tic chance to meet locals.

Some­thing mag­i­cal hap­pens in Sol­dot­na every year dur­ing the fourth week of July. That’s when the town comes alive with Sol­dot­na Progress Days — an annu­al com­mu­ni­ty cel­e­bra­tion worth plan­ning your vis­it around.