“My husband used the binoculars to see how many there were and what kind,” Crace-Murray says. “After determining there weren't any mature bulls, I told him I would love to get a picture. So we put the inflatable in the water and slowly motored just close enough to avoid interrupting their crossing.”

Daughter of a bush pilot (Dad) and a school teacher (Mom,) Crace-Murray is a freelance journalist, researcher and translator who grew up living in traditional Athabaskan, Aleut and Yup’ik Native villages throughout Southwest Alaska. She speaks Yugtun (the Central Yup’ik language), Spanish and English and completed her doctorate in applied linguistics from the University of Alaska Fairbanks in 2018. Now a Wasilla resident, she is raising her children with the same indigenous and family values she learned as a child surrounded by Alaska Native culture.

That day on the Kobuk River, back in 2009, Crace-Murray and her husband approached the animals, careful not to disturb their passage. Once the herd reached the middle of the channel, the couple eased into position behind them, where Crace-Murray used a telephoto lens to capture the shot.

“The caribou were calm and continued their migration across the river and exited without portraying any signs of stress,” she says. “They shook off the water, and waited for each herd-member to exit the water, and then slowly continued down the beach. It was a beautiful moment to witness.” 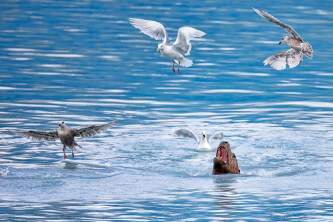