This giant of the deep can reach nearly 60ft in length and is nearly as big around as it is long. It's girth averages 70% of it's length, or 45ft. Other than it's large middle, this whale is most readily identified by its noticeable lack of a dorsal fin. The North Pacific Right Whale extracts plankton from the water with specialized strainers called baleen. Just 150 years ago as many as 30,000 animals were thought to inhabit the north Pacific but that number has dived to a low of less than 100 due to overfishing in the 19th century and continued pressure from pollution, commercial fisheries, etc. 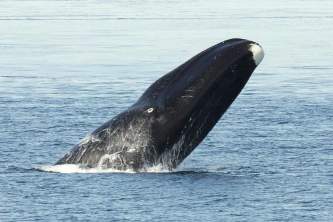