So the snow has fallen, and hundreds of cross-country skiers are abroad on Anchorage’s vast system of multi-use and groomed ski trails. But what a dizzy array of techniques and speeds!

It can be confusing

Athletes in tight Lycra rocket past, moving like speed skaters as they plant poles in explosive, rhythmic motions. Others seem to shuffle along, moving one ski forward and then another.

One group with wide skis trundles out of untracked forest, kicking through drifts and untracked snow. Others shoot down icy straight-aways, tucked as though downhill racers. Still others seem to pump up and down as though listening to a rock music beat, kicking and gliding with skis shifting up and back in the parallel ruts like pistons.

And then there are the skis. Some are long, some are short. Some are curvy and fat, with metal edges and scaly bottoms. Others seem so skinny that you fear you won’t be able to stand on them without falling down.

You’d like to try it out, but where do you begin?

Unlike alpine skiing at a resort, cross country skiing generally means “free heel.” Your boot toe is attached to the ski binding while your heel rises off the ski as you move around. This configuration allows great freedom of movement, especially for climbing hills and accelerating down flat trails. It’s what makes XC skiing intuitive and feeling natural.

Classic XC skiing is probably what you visualize when you think of Nordic skiing. Using poles to assist, you glide or shuffle forward on alternating skis that move parallel to each other—first one side and then the other. This technique is most versatile and can be used for traveling just about everywhere there is snow—through unbroken powder, traversing backcountry slopes or moving down parallel tracks set into the groomed trails.

A key to classic skiing is the pocket beneath the boot. Classic skis have camber—they are slightly arched so that the portion of the ski beneath the boot is held off the ground. When skiers weight that ski, the pocket gets pressed into the snow. Wax or texture on that bottom grips the snow surface, allowing skiers to push off in a spring that sends them gliding forward for a second or two on the opposite ski. As the glide tapers off, the skier shifts and performs the same maneuver on the opposite side.

Poles complement the technique. Skiers plant the pole on the same side that’s being weighted and push off. At the same instant, they spring onto the opposite ski for the glide and swing the opposite arm forward for the next plant.

This “diagonal stride” goes back and forth, side to side. Like this: On right side, ski gets weighted and pole is planted. On left side, ski glides and pole arm swings forward. And then you reverse. All on a one-two, one-two count.

The overall motion can be very intuitive. It mimics the natural motions that you would make if you were taking a brisk walk or climbing a hill using ski poles. Once you’ve done it for even just a few minutes, it quickly starts to feel right.

Skate XC skiing is a bit different. The skis are skinnier and shorter, with no pocket for gripping. Moving forward requires the skier to glide with alternating skis moving at an angle to each other, pushing off side-to-side much like hockey skating or figure skating. In fact, experienced ice skaters have a head start—without poles, the motions are very similar.

This technique relies a firm surface to work well, with snow typically no deeper than an inch or two. While skate skiers usually stick to groomed trail systems or packed routes, the technique can be a blast if weather has produced a firm crust in the wild. Spring conditions on Alaska’s wetlands and alpine slopes often allow skate skiers to travel for miles in and out of the backcountry. Light snow cover on a frozen lake or creek can also make for great skate skiing.

Novices should start with classic skiing. It is easier to learn and takes much less time to become proficient enough to have fun touring around. In fact, you can probably be classic skiing and enjoying a basic shuffle-glide technique in minutes.

Instruction will get you started with better form and help you improve faster. An hour on skis with an instructor can be free or cost as little as $7.50 for kids.

Check with the Anchorage Parks Department or the Nordic Ski Club of Anchorage.

This program is where many of Anchorage’s competitive ski racers learned and became fast. Held three days per week, with two sessions per season, with groups based at several venues around town. You can rent skis that match several models of inexpensive kids boots too.

The city parks department offers ski lessons for adults and children. Check the current copy of the Winter Activity Guide. Lesson details are on pages 10-11 in the 2017-18 edition.

A link to a reservation page with current times. 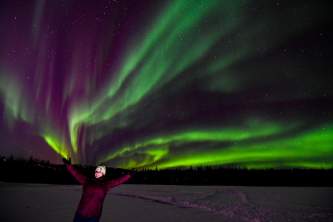 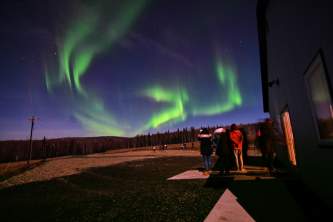 Check the auro­ra fore­cast, the weath­er, and most impor­tant — stay up late! 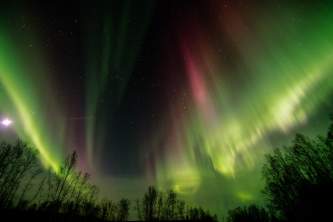 The glow from street­lights can obscure an auro­ra dis­play. Head to these spots at the edge of town 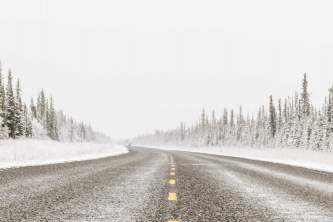 Packing The Car For a Safe Winter Adventure in Alaska