It’s no surprise that families, travelers and adventurers converge in great numbers on Alaska’s road system campgrounds between Memorial Day and Labor Day. But camping during the “Shoulder Seasons”—April-May and September-October—can be a great experience too. In fact, many Alaskans actually prefer staying in campgrounds after Labor Day to avoid crowds and enjoy campfires under starry skies!

Why venture out in Spring (April / May) or Fall (September / October)?

A few things to keep in mind planning your shoulder season campout: 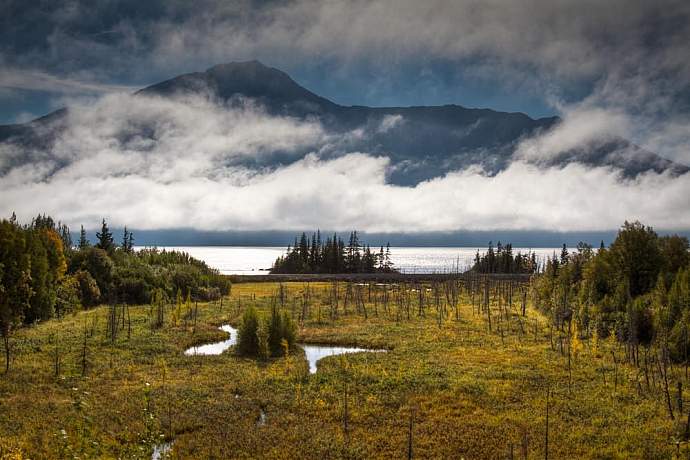 Spring: This popular roadside campground on Turnagain Arm southeast of Anchorage is open year around, and is almost always snow-free by April. Once the paved Bird-to-Gird bike trail clears off, the campground can serve as base for early-season cycling and strolling. The exposed Bird Ridge and the Turnagain Arm Trail between Potter and Windy both feature some of the earliest hiking in the region.

Fall: Fall often brings wet and windy conditions, and camping here isn’t worth it. But when high pressure and dry weather prevail, this is a great September and October destination. The sea level location produces warmer temperatures than you’ll find in campgrounds at higher elevations, featuring excellent hiking, biking and exploration.

Getting there: Mile 101 of the Seward Highway in the community of Bird.

Best sea­son: Spring, some­times fall Spring: With paved roads and park­ing pads — and a lay­out that bathes sites with gobs… 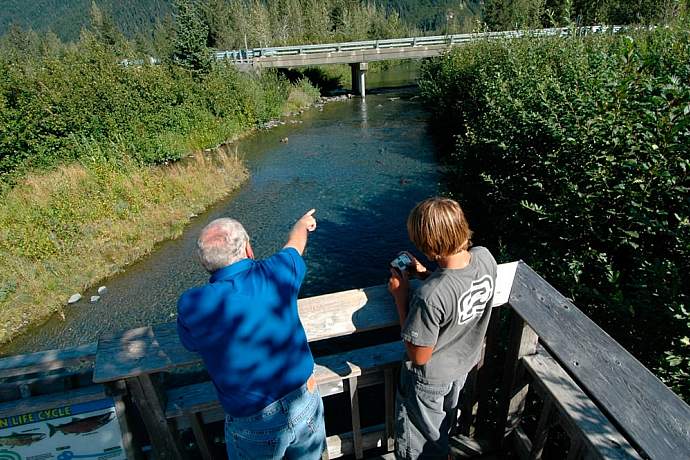 Spring: With paved roads and parking pads—and a layout that bathes sites with gobs of spring sunshine—this large campground on the Trail of Blue Ice multi-use path often fully melts out in April. The FS will open gates and allow free camping on its central loop until services and reservations begin toward the end of May. The low elevation offers early season hiking, biking, fishing and paddling.

Getting there: From Anchorage, go about 55 miles southeast to Mile 78.9 of Seward Highway, near the head of Turnagain Arm. Take Portage Glacier Road east to Mile 4.1.

Best sea­son: Spring, some­times fall Spring: Sit­u­at­ed in a hand­some birch for­est on a bluff right above the sweeping…

Spring: Situated in a handsome birch forest on a bluff right above the sweeping tides of Turnagain Arm, Porcupine Campground features some of the earliest camping and outdoor adventuring in the region. The first couple of miles of Gull Rock Trail often dries out enough for decent hiking by early May, and the steep Hope Point Trail is often snow free by April.

Getting there: Go south on the Seward Highway to Mile 56.5, turn west on the Hope Highway. Drive 17.8 miles—passing the community of Hope—to the end of the road. 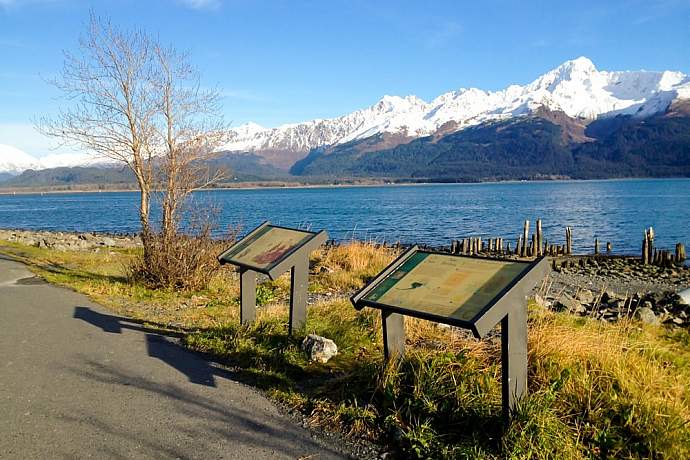 The campground complex overlooking Resurrection Bay in downtown Seward embraces both what they call shoulder season (April 15 to May 31) and winter camping (Oct. 1 to April 14), even offering electrical hookups at some sites in every single month. During sunny May, the bay comes alive with marine wildlife and boat tours to view the gray whale migration. The campground is a great base to experience Seward’s many attractions. Reduced rates during shoulder and winter seasons.

Getting there: Take the Seward Highway into Seward. Turn left (toward the ocean) at D Street and follow it as it turns into Ballaine Blvd. 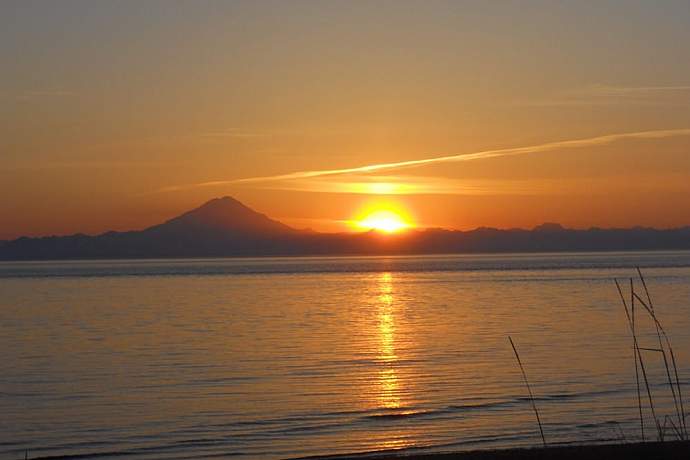 Spring bird migration brings sandhill cranes, shorebirds and other flocks to the estuary and marsh at this popular campground better known as a summer fishing destination. The sunny spring days feature the same stunning vista of Iliamna and Redoubt volcanoes that you’d find June to August. Usually open year round.

Getting there: The park is about 40 miles south of Soldotna off the Sterling Highway about Mile 137.7.

Best sea­son: Spring This Alaskan land­mark reach­ing 4.5 miles into the mid­dle of Kachemak Bay opens to camp­ing on… 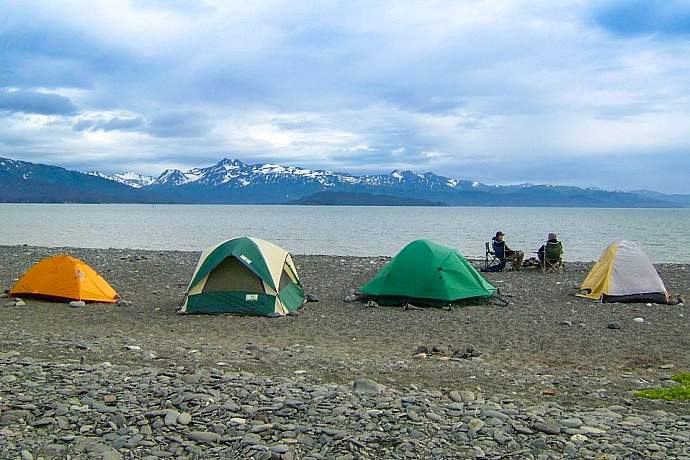 This Alaskan landmark reaching 4.5 miles into the middle of Kachemak Bay opens to camping on April 1, featuring the same great views and beach walking potential you’d find here during the very busy summer season. Check out the annual Kachemak Bay Shorebird Festival in early May, along with early season wildlife tours and charter fishing.

Getting there: Take the Sterling Highway to Homer. Follow the main road as it veers right to become Lake Street, then left to become Ocean Drive and finally curves right again onto Homer Spit Road.

Best sea­son: Fall Blaz­ing fall col­ors paint a moun­tain panora­ma around this pop­u­lar fam­i­ly camp­ground at the head of… 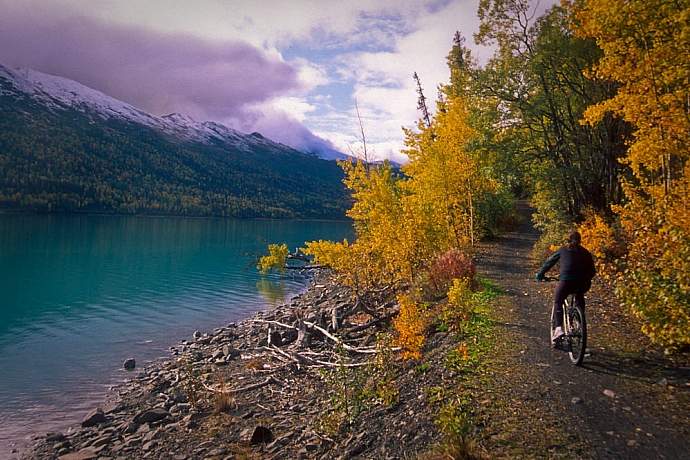 Blazing fall colors paint a mountain panorama around this popular family campground at the head of the eight-mile-long lake deep inside the Chugach Mountains. The extensive lakeside trail system remains open to biking and hiking, while the lake fills to the brim, augmenting late-season paddling. Even after first snow closes the main gate, walk-in camping is allowed near parking spaces along the day-use loop. Plus—crisp night frosts have eliminated the bugs!

Getting there: Exit Glenn Highway at Mile 26.5 at Eklutna and drive ten miles to campground at the end of the road.

Best sea­son: Fall 2019: The camp­ground will be closed for 2019 due to falling bee­tle-kill trees. State parks plans…

2019: The campground will be closed for 2019 due to falling beetle-kill trees. State parks plans to reopen the campground after the hazardous trees have been removed.

The fall foliage phase change followed by night frosts flattens the dense summer undergrowth surrounding this 108-acre lake in the Susitna Valley woods, lending this popular lakeside campground a far more open feel that begs for late season hiking and exploration. You’ll probably have your pick of its 97 campsites, including those difficult-to-nab sweet spots along the shore. Paddling and fishing in the weeks before snowfall can feel serene and elegiac, if sometimes chilly. You might have the whole lake to yourself.

Getting there: Go to mile 67.5 of the Parks Highway and take Nancy Lake Parkway 6.5 miles to the end. Firewood may be sparse in the campground itself, but can be gathered in park or purchased.

Best sea­son: Fall 2019: The camp­ground will be closed for 2019 due to falling bee­tle-kill trees. State parks plans… 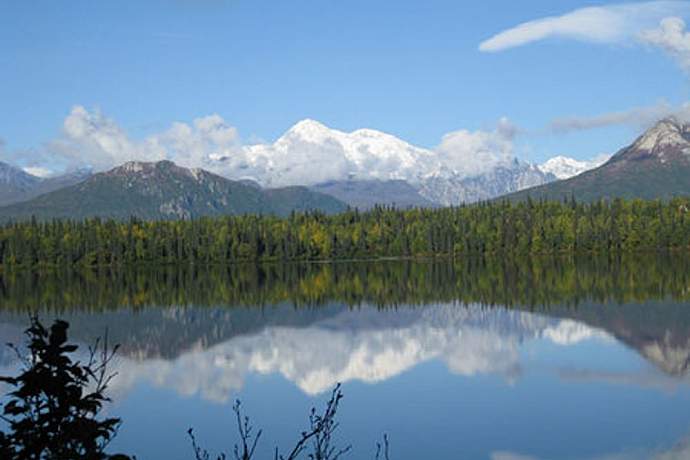 2019: The campground will be closed for 2019 due to falling beetle-kill trees. State parks plans to reopen the campground after the hazardous trees have been removed.

Want the Fall Camping Experience on steroids? Just about any of Denali State Park’s campgrounds spread between Mile 132 and Mile 163 of the Parks Highway will deliver the gamut. You’ll find stunning fall colors with possible views of Denali itself, crisp bug-free nights, decent late-fall hiking with fewer bear concerns, plus paddling, fishing and evening campfires. Byers Lake Campground, situated on its 325-acre lake, is a great destination to check out. Many Alaskans wait until early fall to do their Kesugi and Curry ridge backcountry adventures, too, using the front-country campgrounds as a base camp.

Getting there: Denali State Park sprawls along the Parks Highway for about 30 miles after Mile 130. Byers Lake campground is about 147 miles north of Anchorage and 90 miles south of the entrance of Denali National Park.

Best Sea­son: Fall Both of these small loop camp­grounds on crys­tal Gran­ite Creek in the Kenai Moun­tains fea­ture quiet…

Both of these small loop campgrounds on crystal Granite Creek in the Kenai Mountains feature quiet solitude, great views and creek-side ambience during the fall season. Bertha is slightly higher in elevation, beneath a looming mountain face, situated next to a recreational gold panning zone on Bertha Creek. Granite nestles off the highway in a broad valley where the creek meanders across gravel bars that can be explored. Watch for spawning coho salmon in October! Both are favorite late-season car-camping destinations that will fill up on clear, dry Saturday nights well into September. Classic forest service campgrounds that beg for evening campfires beneath the stars. Close to the Johnson Pass trail system and a paved five-mile bike path between Johnson Pass and the Hope Highway.

Getting there: Bertha Creek Campground is about 61 miles south of Anchorage just south of Turnagain Pass on the Seward Highway. Granite Creek is about three miles further, just beyond the Johnson Pass Trail parking.

The Best Combo Day Tours in Seward, Alaska for Visitors Short on Time

If you’re short on time in Seward, these great local com­pa­nies offer 2 expe­ri­ences in 1 – the ulti­mate quick…

The Best “Non-Excursions” in Port During Your Alaska Cruise